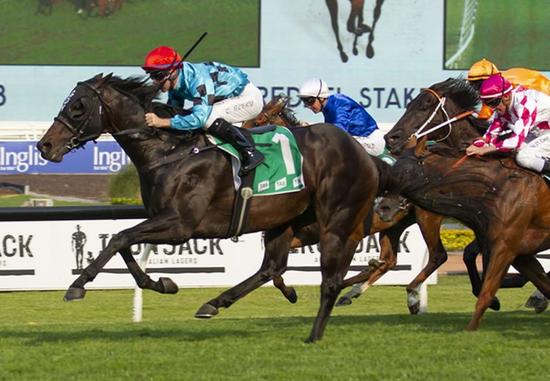 There was multiple winners in November and December at a variety of locations and on a variety of tracks in New South Wales & Queensland.

On the 2nd November Pierata won the Redzel Handicap at Rosehill. Pierata bounced back from an unlucky fifth in the $14million The Everest, to score a stylish win in the inaugural $1million Stakes over 1300m. Pierata defeated Group I winners Trekking and Le Romain and the winner's cheque was bolstered by a $750,000 bonus. Pierata has the imposing record of nine wins and eight placings from 23 starts with prizemoney in excess of $5,640,000.00

Chapelis won on the 5th November at Nowra. This was the mares second win and well deserved after not a lot of luck in running.

Two year old filly Tudor Music (Your Song x Tudor Magic) won at Scone on the 13th December at only her second start. This filly first up, had ran a fantastic race effort at Newcastle, to run second over the 900m.

Stable "Gentle Giant" Rari was able to finally get that maiden win, at Rosehill, on the 26th December. Rari had previously been unlucky with the finish - 20th Nov 2nd at Rosehill beaten 0.1 length, 2nd at Randwick 6th December beaten 0.1 length. Just a tad unlucky and always trying his best and finally got a well deserved win..

Eleven Eleven went to the Gold Coast to start his preparation for the Magic Millions Guineas in January 2020. On the 30th November he ran third in the Winning Ruperts Stakes at Doomben over 1200m. Next he ran second in the Gold Edition stakes over 1200m at Eagle Farm. His next start was his first attempt over the 1400m in the Vo Rogue stakes at Eagle Farm and he was able to finish Third. All very creditable efforts and he was on track for a tilt at the Guineas at the Gold Coast.

In November the placings included :

In December the placings included :