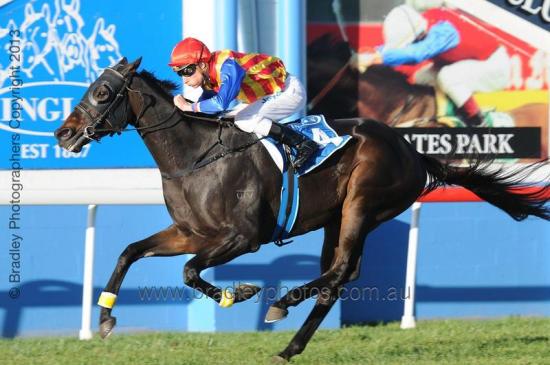 A $16,000 investment returned more than $320,000 to a lucky band of owners when Taxmeifyoucan surged down the centre of the track to claim the Inglis Guineas (1400m) at Scone.

Greg Hickman bought the son of Ad Valorem at the 2011 Inglis Classic Yearling Sale because he reminded him of another outstanding performer for the stable, the Group 2 winner Sportsman.

"When I looked at him [Taxmeifyoucan] he reminded me of Sportsman, he was a nice leggy little black horse, much like Sportsman. I just liked the look of him,” Hickman said.

Sportsman won more than $780,000 for connections in a career that included wins in the Group 2 Expressway Stakes and Shannon Stakes among his 10 victories but Taxmeifyoucan took his prizemoney tally to $479,000 with his Scone success.

Taxmeifyoucan ran third in the Group 2 Royal Sovereign Stakes (1200m) and Listed Gosford Guineas (1200m) to show he was capable of claiming the Inglis Guineas before racing up to that form with an impressive victory.

Hickman booked in-form rider Blake Shinn to partner Taxmeifyoucan at Scone. The top jockey worked Taxmeifyoucan into a midfield position from an awkward gate early before the gelding travelled comfortably for him until early in the straight.

Taxmeifyoucan let down brilliantly when asked at the 200 metres before striding home to score to the cheers of his large group of wonderful owners on track to see him earn a $322,000 winner’s cheque.

“It means as much as any win I've had but it's also great for the owners, there are new owners and long-time owners in the horse and anything like this means a lot,” Hickman said.

"He's been ticking over pretty good and all he needed was the right run.

"We were going to lead but they went pretty hard. It was a great ride by Blake because he positioned the horse well.

"He's done his job and deserves a break.”