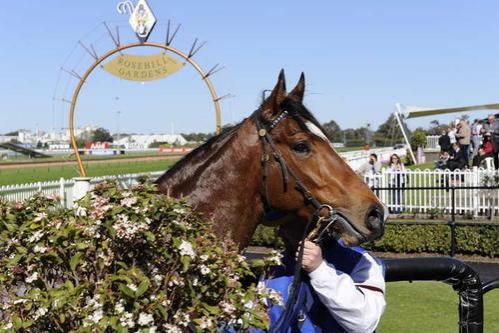 DEFINITE CHOICE RUNS IN GROUP 1 SPRING CHAMPION STAKES
Bargain buy Definite Choice proved his mettle in Group One company with a gallant fourth in the Spring Champion Stakes at Randwick last Saturday.
The three-year-old trailed the speed before mounting a challenge at the top of the rise and he battled on doggedly to finish on the heels of the placegetters. The first three horses across the line - Monaco Consul, Gathering and Viking Ruler - are heading to Melbourne for Victoria Derby campaigns but Greg Hickman is looking to the future with Definite Choice, who he believes will return a better horse in the autumn.
Champion jockey Darren Beadman, who rode Definite Choice in the Spring Champion Stakes, agreed. "Darren thinks he could be a nice horse for Easter, or even a Grand Prix Stakes horse in Brisbane because that would give him that bit more time to mature," Hickman said. "Darren rode him exactly how we wanted him ridden on Saturday, He had him one out, one back and the horse relaxed. "He looked like being right in the finish but he didn't quite let down on the heavy track."
Greg and Darren have enjoyed a successful association over many years and combined to win a Prime Minister's Cup with Sir Dex. Like Sir Dex, Definite Choice was not an expensive buy as a yearling and Greg purchsed the son of former smart two-year-old Not A Single Doubt for just $45,000 at the 2008 Inglis Classic sale. "He was one of those horses a bit like Sir Dex who was a leggy and immature type but he just took my eye," Hickman said.
Greg paraded Definite Choice at his Warwick Farm stable during an open day last year when several lucky owners bought into the gelding. He plans to hold more open days at his stable in the future with dates to be posted on his website.